What’s a nice Jewish Girl like me doing on a list like this? I’ll tell you what– soaking it in and passing the message of finding and tendering YOUR INNER TOUGH GIRL! 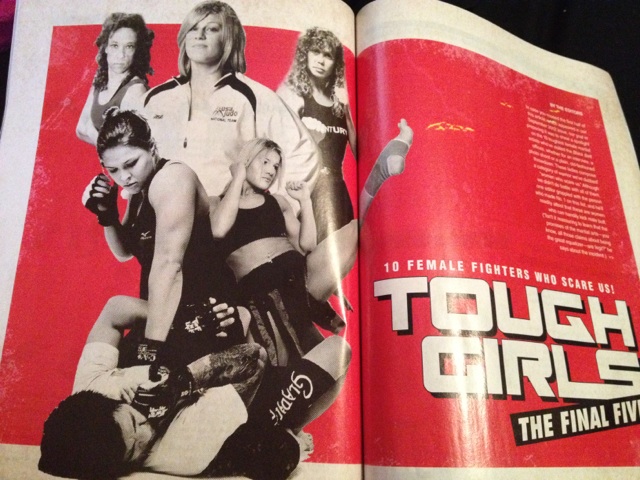 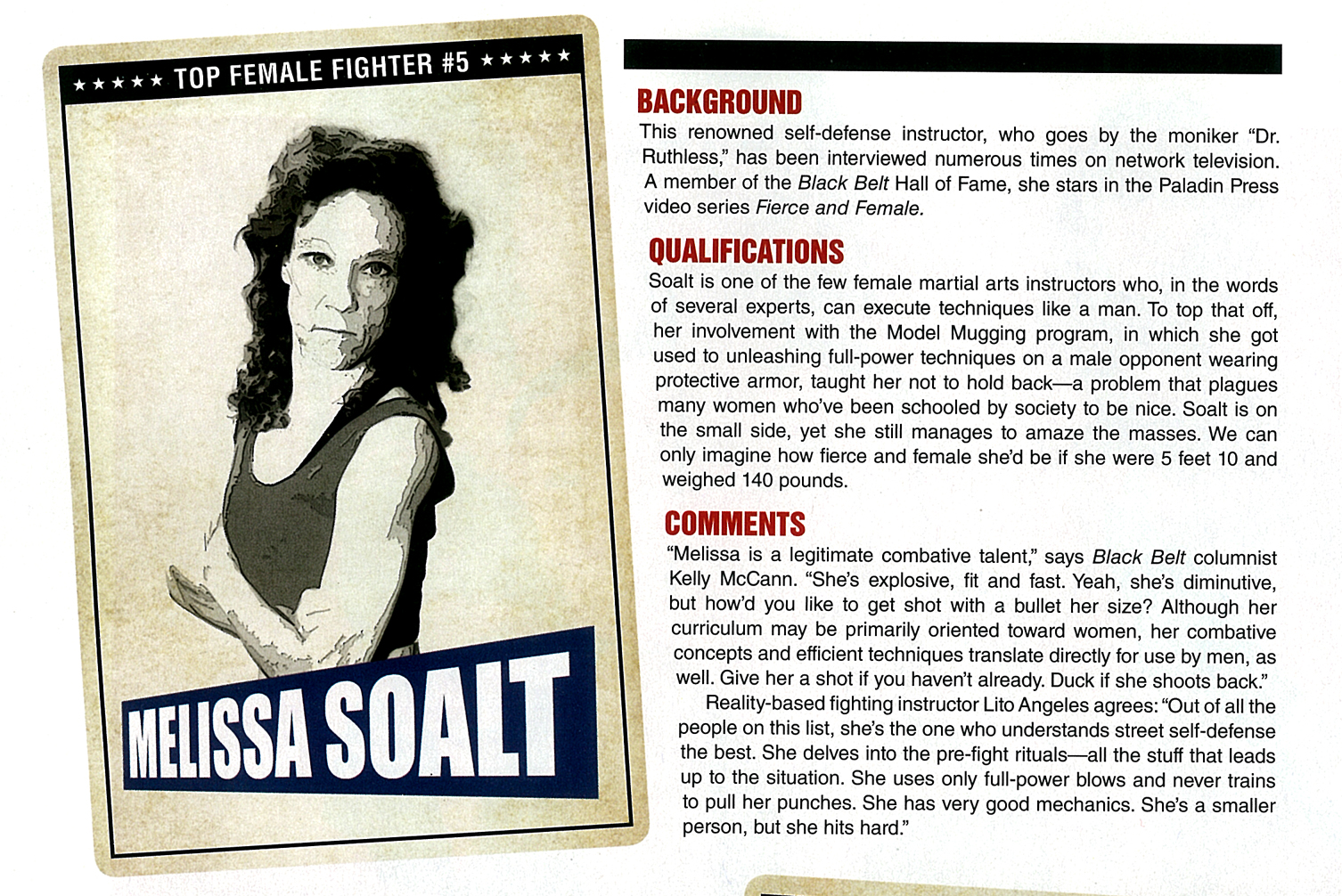 I was utterly surprised and honored to find my self amidst this impressive roster of formidable femmes and fighters including my hero, the lioness Kathy Long. To receive  glowing comments by Combatives legend Kelly McCann makes it that much sweeter:

Melissa is a legitimate combative talent. She’s explosive and fast. Yeah, she’s diminutive but how’d you like to get hit with a bullet her size?

And from reality-based instructor and defensive tactics trainer Lito Angelis:

…she’s the one who understands street self defense the best. She has very good mechanics. She’s a smaller person but she hits hard.

OK, self promotion over.

A few words about “TOUGH” – a phrase which has primarily been associated with men possessed of steely skills and fight. Women, it’s time to renew our claim to this word.

Armed with our love and fury, deep-seated survival instincts and fervent desires to bring justice to the world, women have always been tough, long been warriors, fighters and even deadly dames. (Hey, our gender gives birth for Chrissake!) If not in physical realms, we’ve waged formidable battles in social spheres — for the right to vote, for equality in the workplace, for reproductive rights. For our bodily integrity. And the fight goes on…

As sexual assault and violence against women continues to plague our world, it’s  incumbent upon women to GET TOUGH and nurture this potential.

First, a “get tough” clarification: Don’t equate tough with being fearless. (Fearlessness isn’t the goal; we need fear and to go without is dangerous.) Next, remove preconceptions and understand: Far beyond any particular skill set, “tough” is an attitude, a raw tenacity of heart, of strength and guts, and it’s often born in the fires and tremors of fear. Fear is in fact a frequent precursor to “tough.” (Yep, this toughee also knows this well.)

Much like beauty, toughness is sparked from the inside out. It’s often home grown, revealed under the duress of dire straits. I see this all the time with women who have NO training, yet fight like Fierce Mothers and bitches–as in junkyard bitches.

Take for example one of my favorite, most extraordinary success stories: When 23 year old Hong Huang was run over (twice; forward and then backward) by a truck driven by a level three sex offender who had followed her when she left her work shift in Tacoma Washington one night, she lay motionless on the ground: Her back was broken, her pelvis, cracked, her lung near collapsed and she suffered numerous facial injuries.

Despite all, when her attacker attempted to scoop her her up and throw her into his truck, she fought him off with the only weapon she had: HER FISTS! With his face in range she punched him in the eyes, pummeling the shit outta that face. He aborted his plan. Her presence of mind was extraordinary. Refusing to go into shock she took note of his features and they swiftly apprehend this motherf. She said of that fight- back moment:

“It was just like a rush of, you know, adrenaline and endorphins; everything your body does when it’s in survival mode.”

Equally memorable was the shy look on her face when retelling her story from a wheelchair weeks later. Her head slightly cocked to one side in a school girlish manner, she remarks, Well…..I guess I connected.

In another list, I would dub her Queen Of Tough.

Here’s a clanking toast to gutsy women who understand that fear can and must be forged into fire and that being afraid or even terrified does NOT mean being defenseless.

In the end, tough is not only a quality but perhaps a destination. It doesnt matter how you get here–whether you’re pushed by fear or pulled by power. What matters is that you arrrive.

Mesdames and Mademoiselles — let’s toughen up together!