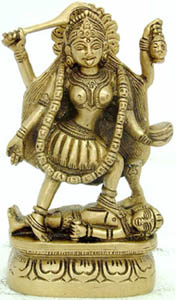 She is also the Primordial Womb world. For thousands of years, Indians have worshipped the Great Womb, an aspect if not icon of the Mother Goddess herself: domed monuments and vulva shaped statues adorn public spaces. At nineteen, India’s formidable girl power appealed to my budding feminist ideals; a vulva here, a vulva there, and with a cabal of goddesses, as fierce in their sexuality as their ability to restore cosmic order and save the world from doom, I mean… what’s not to love?

Sure, Mother India has plenty of faults—immense poverty, sickness, child labor, festering inequities from an antiquated caste system, to name a few—but spiritually speaking she’s a wise and zaftig momma. Her divinity is all-inclusive; her wisdom is as good as it gets—girl, you are already many! You are not, as Amy Bloom once wrote, one note on a flute. More like a sonata with every conceivable permutation. It’s hard to dismiss or escape India’s mind-blowing mix: everywhere you turn, the numinous and the primal, squalor and splendor, the smells and sounds of Genesis and Rot share the tiniest of spaces, entwining like lovers in a great cosmic fuck.

So what better place for learning how to give a good blow-that’s blow as in strike—than my beloved Mother India?

I was on a densely packed train. I knew it was coming – his hands I mean. I’d been traveling through strict patriarchal cultures where even the thought that women owned their bodies and had a right to do so wasn’t a blip on the screen; taking and grabbing were privileges of men—the proof was invisibly inked on my body like telltale DNA at the scene of a crime—so I’d learn to smell intent. When a man posing as helpful Mr. Rogers wouldn’t take No for an answer – he’d helped me with my knapsack, then stuck too close and tried to help himself to me-that was it. I went off: I slammed him in the head; I bashed him about the face and neck and shook him like a rag doll. Then I did the unthinkable:

I cracked his offending hand hard as I could. I nailed that sucker. Little bones crunched and “gave” beneath the fury of my fist. I watched him deflate like a punctured balloon, stunned by the power emanating from this hippie turned Beast Girl—and frankly so was I. A home-run grin peered through my fury. It wasn’t that I enjoyed hurting him—well, maybe just a little—but that I had issued his terror, not the other way around; that my body, which I’d spent my entire girlhood hating, was an instrument of power.

The lights went on.

Call it cellular memory or the magic of Mother India but when I struck back, time and space swung its doors wide open, or so it felt, and I went swirling back through evolution deposited into the skin of much earlier predecessor: Neander Babe, I call her. She had thick gnarly legs and a tribal chic ‘do. I remember feeling that I’d slipped into that genetic pool, merging with prehistory, landing in a time that predated domestication, feminine deodorants and plastic bosoms. Before our own madness was pruned back by fear, hemmed in by a litany of don’ts.

In my loopier moments, I imagine that had it been Paris instead of India, I might have poisoned my mauler with a savage bon-bon, or sicked my poofy Bichon Frise on him, or stabbed him with a barrette-something pointy and au courant. In reality, years later on an Italian train, when a pot-bellied pig of a man stuck his hand down my shirt and grabbed my breast, I slapped him across the face, flashing him my best Sophia Loren look of indignation. It was very dramatic; people came running, there was a lot of gesturing and noise. It was, in a word, Italian.

But this was India where life is far more elemental, closer to the bone, and all things mystical are in plain sight. So the fact that my experience was on the supernatural side, that I tapped into powers more ancient than myself, or that the spirit of Kali, a “divine destructress” with avenging limbs, had gotten under my skin or played a hand in my uprising, should come as no surprise.

While writing this I learned something new. Kali, who is typically portrayed as bloodthirsty—feared and revered for her battle-girl persona—is also a symbol of women’s empowerment, described as a perfect model of female balance: powerful, active and assertive—never pointlessly destructive. And what exactly are her legacies? She returns women to “three virtues” historically denied women in most cultures: Strength (moral and physical); intellect and knowledge; and sexual sovereignty.

So maybe that’s what hit home on my maiden voyage.

Here’s my loving shout out to Mother India and her fetching femmes fatales—girls, keep the force alive. 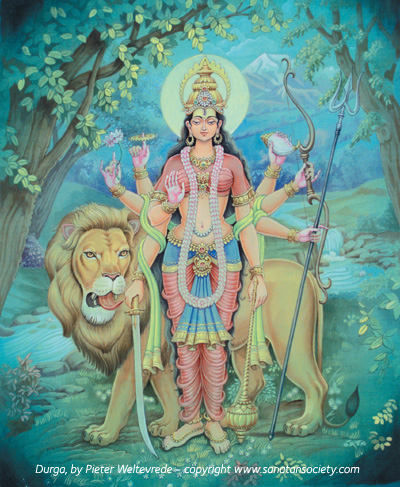 Dangerous Dames: A vibrant melange of Beauty and Beast.
The  Prayerful and the Primal Rolled Into One.