Golda got it right: If women are to learn self defense, shouldn’t men learn self control? (I say “men” because statistically speaking it usually is.) 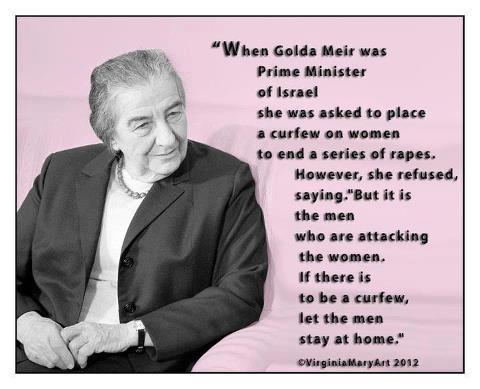 First the caveat: I believe in fierce self defense. I endorse sensible risk reduction and proactive self protection, from cultivating “jungle consciousness” and heightened internal and external awareness up to and including the acquiring of emergency fight-back skills. I believe in taking responsibility for our personal safety. You’re the only one who’s with you all the time, so you’re in the best position to save yourself. If you haven’t read my Forbes guest blog, BEING NICE CAN KILL YOU, please do. It speaks volumes to where I’m coming from and to this point:

The more a woman is groomed in traditional behaviors of female socialization and platitudes of politeness the more at risk she becomes.

After the Investigation Discovery Show aired featuring my friend Keri’s brutal attack and escape in Rome using fight and flight, a flurry of critiques about her choices appeared online. What inflamed me is that it speaks to how quickly we as people and as cultures default to blaming the woman – “What was she thinking/ wearing/ doing?” – focusing on her behavior vs the deceptive, rapacious acts of the attacker. The sexual predator. You know…the guy who ruins the woman’s life. Or tries to. (Thankfully not in this case. Eat this shithead… and I’ll see you in court.. in Rome…. where you attacked me….and God knows how many other women…)

Blaming the victim, even in subtle ways, is not only insulting and hurtful but in the words of friend and legal expert Roger Canaff, it “deepens survivor’s trauma, delays their healing, and takes the focus off of the attacker responsible for the situation in the first place.”

Psychology 101: Maybe it’s a way for people to distance themselves from the harsh reality that “it” could happen to them. That the presence of danger always exists, that bad things happen to smart, good, “God loving” women. That the upstanding guy in your ‘hood who’s kind to your kids, or the man you’ve lunched with before, who you’ve dated without incident, who fixed your faucets, or the funny guy you met yesterday while walking the dog, or the man you married is also a predator.

To appreciate the harm and knee jerkery of victim blaming, look no further than this Dallas news article:  But don’t miss the trail of insightful comments:

“I wonder if those who try to blame the victims of rape, would be as ready to accept blame for being robbed or assaulted because of “reckless” behavior that caused them to be in the pathway of the criminal who robbed or assaulted them, especially [those] who are always so quick to place blame on the women victims.”

Keri is not only a hero, a smart ballsy chick who smacked down her attacker and did the unthinkable (leapt off his balcony and across slippery-sloped Italian tiled rooftops defying death) but she’s also a friend. Knowing all the details of her particular story, any perceptions of “recklessness” are off base.

I’m pissed about this, but aiming to be tactful –hence my shout out for the cessation of victim-blaming brought to you here vis-a-vis my comment (enclosed below) from one online “discussion.”

But first, a request for you dear reader. Take this phrase to heart. It bears repeating:

The presence of danger always exists. Don’t get uptight about it just comprehand it fully, then dissolve or disown any illusions you may have about otherwise realities.

And please understand this: “No one is vulnerable to sexual violence unless a person near them means them harm.” (Key phrase = “means them harm.”) It initiates with a perp’s intent. Even when it’s a crime of opportunity.

It stems from a rapist’s feelings of violent entitlement. The right to take without consent.

Even if you or I don’t agree with the choices a woman makes, or deem certain behaviors unwise or downright foolish as I sometimes do, it does not mean she shoulders responsibility for an act of violence committed against her– and this is why I’m NOT in favor of rape prevention TIPS as primary self defense. Because:

(A) It unduly increases female fear encouraging litanies of DON’T do this. DON’T that! Never be alone…For Chrissake people, women have lives to live. (B) More importantly it misleads women into thinking that safety from violence, rape, assault rests solely upon women’s behaviors, and this potentially then blames women.

It’s one of the reasons why many assaults and rapes go unreported — for fear of scrutiny or blame. FACT: sexual predators and victimizers assault women all hours of the day and night. And in acquaintance or date rape (such as Keri’s foiled scenario) the attacker has established familiarity AND already has proximity to his intended target. So the idea of never being alone with a would-be predator becomes a mute point.

Below is my comment– I post as “savage beauty”- which is my response to a slew of victim blaming knee-jerkery, and this overt suggestion: ” That women of color are more naturally distrustful and would never then wind up alone with a predator or abuser.”  As happened to Keri. I take issue with this, and I think it misses the point for the reasons below:

As a women’s self defense pro, as one who carries some street cred and who has spent time traveling and living in other cultures, let me first say: I don’t dismiss the truth that certain upbringings, cultures, experiences and mindsets heighten female intuition and perception of potential danger- that’s TRUE. And I agree: all women need alert to potential behavioral clues and draw hard lines. It’s something I call “jungle consciousness” and it’s central to my women’s self defense teaching and paradigm.

That said, the BIGGER truth and moral in Keri’s story of outrageous bravery and best use of fight and flight reflexes — not to mention her outstanding presence of mind, disallowing Marco to break her down, her execution of decisive action in The Moment of Truth when seconds counts, and additional meritorious actions which I could go on and on about here– the point is this: Men like her attacker Marco are VERY GOOD LIARS AND DECEIVERS–they’ve majored in deception, in disarming women’s radars and staging false realities in a calculated fashion under great care and cover. So Keri’s story could be any woman’s nightmare and this goes to why women MUST be trained in emergency and aggressive “last resort” self defense strategies. Because it could be you or me or a sister or BFF.

You or I may have strict boundaries and rules. Perhaps you or I would never have gone back to this man’s apt. Good! Smart! Hooray for us! (For the record, Marco  gave Keri no reason to fear him; he was a good guy when they were at his digs hours earlier.) But don’t think for a moment that it couldn’t happen to “me” meaning any of us. Instead of Marco in Rome, maybe it’s that nice fella from church who you trust. Or the new upright man who moved into your hood and he’s been kind and protective of your kids. And one day he and you are alone and his predatory stripes come out and he goes off on you expecting favors. Or attempts to rapes you. Or maybe he IS your minister/ neighbor/ electrician or other known-to-you entity.

Predators are masterful liars. They know how to BLEND IN and have majored in staging. It can (and it does) happen to the smartest among us and because all it takes is ONE MOMENT OF weakness which we all suffer from time to time.

My friend Keri was violently attacked by a predator who has likely done this before and she had the courage and smarts to prosecute in Italian courts and may have saved many women’s lives and integrity.

I applaud her survival instincts. I could write a book about all that she did right once it all went wrong. Including how quickly she rallied her fighting spirit and arrived at a bottom line decision – which is a critical step – deciding instantly:

“What is non-negotiable? What is uncompromising and worth fighting for? What do I hold sacred?”

It’s from that deep well of spiritual resolve that we take decisive and heroic action.

I’ll close with this: Violence and sexual violence against women is pandemic. Even when women do all the “RIGHT” things we can still be victimized. Because those who will, who violate women, do so because they can.

Let’s stop focusing on what SHE (the woman) did, stop scrutinizing her behaviors. Heighten our knowledge and senses, and acquire savage skills and learn the “tells” and behavioral clues for sure. But let’s also move the conversation onto the vile actions of the predators and hold them accountable. Maybe knock some heads and asses around, as Keri and many other women have successfully valiantly done.

We need to stand together as women regardless of background or race or ethnicity. Because in this war on women, we’re one very big hood: Woman hood.