I’m honored and delighted to have a guest blog on Forbes Woman.
More specifically on Victoria Pynchon’s Blog “She Negotiates.”  (Note: the editors took out the cusses and substituted other words. My fave substitution? FORK HIM UP!)

TITLE:  BEING NICE CAN KILL YOU

Don’t sugarcoat it! That’s my motto when dishing about my favorite topic of 26 years – fight-back self defense.

Recently I’ve taken some flak about my choice of words like “killer instinct” – Can’t you just call it survival instinct? –and my language around clobbering skills and some other colorful phrases like why we need to learn how to “bust stuff up.” Except we wouldn’t be using the word stuff.

The short answer to toning it down?

To be clear, I’m not talking about self defense lite—those insidious tips dished out to women as if we were frail ladies who still go eek at the sight of a mouse. A classic example of this bad advice is to rap your knuckles on the back of an attacker’s hands to release yourself from a thug’s meaty 200 pound clutch.

I’m talking about the low down, dirty ways to counterattack when faced with physical or sexual violence I’m talking about what it takes to focus your ferocity and explode in a no-holds-barred attack to escape your assailant who is typically male.

Take is the operative term

In self defense you learn to take control.

Take is a commanding “do it” word. It leaves no trace of May I in your mouth.

I teach this attitude in my Dharma of Defense, a fierce female paradigm that evolved from decades of immersion in the study of self defense and the female warrior mindset. Central to my teaching is an ancient skill: the ability to pull ferocious from fear—to harness the furies that lie in fear’s wake.

Make no mistake: for women, typically lacking the luxury of greater size and strength, fierce is an imperative not an option.

The same is true for take.

I’m emphatic about this on Gloria Feldt’s Nine Ways Blog.

Effectively resisting attack hinges on women giving themselves permission, without apology, to not only be aggressive… but to take control. Gloria Steinem once remarked that taking – in and of itself – is empowerment for women. Nowhere is this more true than in fight-back self-defense when now may be the only time you have to save your life…

The essence of fight-back self defense is raw.

Elemental. Beyond strategies and moves, it requires women to leverage their killer instincts and tap primal powers often buried beneath fear and female socialization.

It means renegotiating who you can be with your heart pounding in fear. A fear that we all know can paralyze us as easily as it can propel us into action.

Fierce self defense is fierce self love- down and dirty style. Learning to ferociously fight, to dial up Beast Girl and fend for ourselves, takes us into the basement of our being, into a lower center of gravity far below the topsoil of the nice lady camouflage, the cover-girl veneer.

It arouses capacities born in the fires of love, fury, and survival instinct.

But arriving into this heat also feels good. Here lies a respite from the ubiquitous hum of civility: Female hands whip, fists hammer, legs become battering rams. We learn and remember that our bodies can be weapons. That talk and empathy are not always saving graces. That trembling emotions of terror and rage often fund our greatest battles. That we too can be dangerous. Priceless.

There’s little to compare this to: Learning to go primal returns us to a more formidable self.

Feminist anthropologist Michele Rosaldo called thisthe image of ourselves undressed – who we are in prehistory before the artificial constructs of femininity hemmed women in; before plastic bosoms and vaginal deodorants; before our madness and appetites were pruned back by fear and a litany of don’ts.

Do you need to ask about fear’s ill effect?

It is a Diminished Self.

When you multiply that by the masses of women kept in check by threats of force, deprivation, or violence that’s a lot of shrinkage. So for women, fighting back is the ultimate reversal. We become the huntress not the hunted, the predator not the prey.

Oh sure, it’s an acquired taste but once sampled never forgotten. Once you deliver your first crackling blow (in training I mean) or you slam a big guy to the ground it whets the appetite for more. It arouses a hunger for power and self-possession. It whisks us into forbidden zones; unblushing potencies sear into flesh.

If that sounds vaguely akin to another formerly-taboo appetite – sex – you’re on the right page. I view this as part of the Life Force — the fighting Eros of life.

And here’s the bottom line: Fighting back works!

Studies corroborate that forceful resistance strategies are an effective means of stopping rape and sexual assault. Resistance training isn’t the solution to violence against women—such thinking would be victim-blaming and gravely insulting—nor is it always a best or viable option. But it is a vital tool in our arsenal.

Embodying the female warrior spirit is also a curative tonic, mitigating the ills and indignities imposed by fear.

There’s no pretty way to say it—nor should there be. Becoming literate in the skills of “combat” is necessary.

And for the record, I’m the girl who escorts spiders out of the house prayerfully cupped in hands, okay But we need a spirituality that is large enough to house and revere our fearsome potential.

It isn’t just the owning of force that is liberating and potentially lifesaving, but the language of combat is equally decisive.

I want its unmodified fighting phrases – explode into a target; close the distance on an enemy — to be at home in the female psyche and consciousness. I want these skills to be second nature to women’s bodies. I also want them to be a second language. Because one day this unvarnished talk, its foul-mouthed imperatives could save your life.

We all know women, if not ourselves, who at one time or another have been overly, unduly concerned with our gendered obligation to avoid offense in word or deed.

In the context of sexual violence and female vulnerability, the “nice lady” mannerisms – their pleasing parlance – have dangerous consequences.

They often manifest like this – I didn’t want to hurt his feelings or appear like a bitch so I said, okay one more (drink / date/ fill in the blank) when the appropriate protective response might have been impolite, disobedient or downright forceful.

Which spirals me back to my point.

F as in freeing yourself from fear. As in Fighting Heart. And in the most dire of straits—say, mortal danger or sexual assault – you might just need to – are you ready? fork someone up. We just wouldn’t be using the word fork.

It’s a power word. Don’t be afraid to use it. 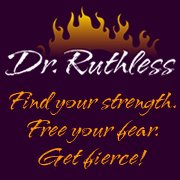 Melissa Soalt aka Dr. Ruthless is an award winning women’s self defense expert and former psychotherapist with Fierce & Female DVD’s. You can visit her here and on her Facebook page here. Melissa has been featured in national and international media and is at work on her first book.