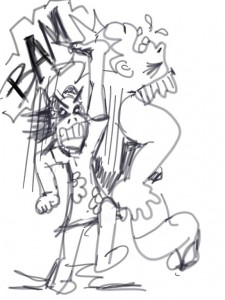 From my FAQ Page: What about the size issue? Lay it on us, Dr. Ruthless. Does size matter?

Yes…and No. First, the yes: Face it ladies, of course size matters! No bull. The average male will likely have more strength, mass and lung capacity than most females. Heck, a big dude can kill you by accident. Being overpowered is always a potential reality.

And this is precisely what dictates our need for smart strategies and techniques, and for unorthodox and EXPLOSIVE tactics that capitalize on our strengths: speed, agility, surprise, cunning, a lower center of gravity (excellent for balance, throws, and maintaining a solid base), good intuition, and powerful emotional reserves that can transform petite women into formidable fighters. We don’t have the privilege of being sloppy or dicking around. We need to get in, get to it, free ourselves and get out. It’s a biological imperative that females need to be SKILLED AND NASTY in self defense.

So ultimately, No. It’s not about size. Self defense is not a contest of strength—it’s a matter of survival. Raw will and determination are just as important as skill. Case in point: when a psycho / would be rapist attacked my slender friend in her home one night (He was disguised as her kitchen trash bag! He then leapt up and attacked, knocking her to the floor), her spindly legs aided by adrenaline morphed into battering rams. Her  savage kicks and screams, fueled by terror, worked–her attacker fled out her window. On the other side of the “it’s not the size” spectrum, in 2006, a heavyset (technically obese) 51 year-old woman in Portland, Oregon fought off and killed her weapon-wielding attacker /home invader with her bare hands, leaving him heaped on her floor—choked to death. These accounts, not Hollywood stunts, are but two examples of real self-defense.

That said, you want to sharpen every edge. This is why my teaching advocates EXPLOSIVE no-nonsense opening moves and the element of surprise, and why you must come to know your killer instinct intimately – the way a woman knows her heart, her sex and her soul. Owning this facet of your human potential IS in itself a deterrent. If you don’t think you have it in you, now would be a good time to smack that thought out of your head!

Here is what anthropologist Margaret Mead has observed about our ladylike kind: “When women disengage from their traditional role they become more ruthless and savage than men. Men will fight to show off their prowess and impress females, but when women fight, it is fierce and to the death…They display no built-in chivalry.”

While this may not always be the case, consider Mead’s quote an affirmative goal. At its biological core, the imperative for us smaller females to be “ruthless” in defense of our lives and our loved ones may also be tied into the maternal instinct housed in our primitive brain along with our survival instinct. At its peak, the maternal and killer instincts come together, giving us girls a double dose of whammy.